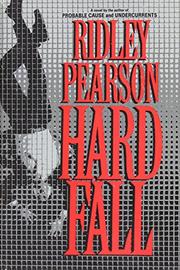 Coming back strong from last year's ragged Probable Cause, Pearson turns in a tale of international terrorism that offers the sort of breakneck action, mature characterization, and tight forensic detail that made Undercurrents (1988) a police-procedural classic. The story opens with a literal bang as hero Cameron Daggett's FBI superior opens a booby-trapped suitcase and blows himself and Daggett's chief link to German radical environmental-terrorist Anthony Kort to kingdom come. The foul-up particularly irks Daggett because he's sure that Kort is responsible for the airplane bombing two years back that killed Daggett's parents and left his son Duncan a paraplegic. Daggett picks up Kort's trail again, though, after the German questions and kills a Seattle flight instructor and then somehow causes the crash of a plane taking off from L.A.'s LAX—a crash that, after complex forensic deduction, Daggett and his new sidekick, alluring FAA agent Lynn Greene, eventually pinpoint to poison gas released on the plane. Tracing Kort to D.C., Daggett and Greene realize that the German plans to down another plane. The pair give chase even as, right under Daggett's nose, Kort sets about seducing Daggett's live-in girlfriend, Caroline, who responds warmly in retaliation for Daggett's growing interest in Greene. Stealing Caroline's keys, Kort sneaks into Daggett's house, kidnaps crippled Duncan, and then fakes his own death in order to divert Daggett from discovering his goal: to crash a plane into the Pentagon, where five leading industrial polluters will be meeting. But as the minutes to the ``hard fall'' of the plane tick down, Kort still hasn't figured on Caroline's furious love for Duncan or on Daggett's rage for revenge at any cost.... Not as psychologically probing as Undercurrents, and hampered by the far-fetched premise, but, overall, a well-oiled thriller with every gear smoothly spinning at top speed.