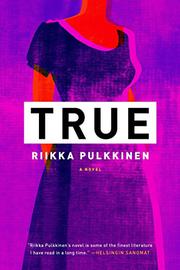 In Finnish author Pulkkinen’s first novel to be translated into English, a dying woman and her family become a prism illuminating love from a variety of often-uncomfortable angles.

Child psychologist Elsa and artist Martti Ahlqvist have had a long, apparently successful marriage. Their only child, Eleonoora, is a tirelessly efficient doctor with an understanding husband and two grown daughters of her own. In the final stage of terminal cancer Elsa comes home from the hospital to live her last days to the fullest. When Eleonoora’s older daughter Anna, an emotionally troubled graduate student, comes to visit and give Martti a few free hours, Elsa arranges to picnic and play dress-up as they did when Anna was a child. But the dress Anna puts on never belonged to her grandmother. A surprised Elsa explains it belonged to a woman named Eeva. Eeva was Eleonoora’s nanny, hired so that Elsa could leave her very young daughter for weeks at a time while traveling for her career. Eeva also became Martti’s lover. As the characters remember or imagine Eeva’s life, she becomes a receptacle for all the forms love has taken in their lives. Imagining Eeva’s passion for Martti and Eleonoora as a child, Anna is influenced by her own unshakable sense of loss as she continues to miss the child of a former lover. Eleonoora, who does not consciously remember Eeva, has co-mingled memories of mother and nanny, but her deep-rooted fear of abandonment keeps her emotionally wary. Even now, while dreading a life without Elsa, whom he has truly loved, Martti remembers Eeva with a mixture of longing and remorse. How much guilt should Martti, or Elsa, feel for what ultimately happened? Is blame even relevant? Was the nanny a surrogate wife and mother or a usurper? Eeva remains tantalizingly elusive as she becomes more real, a girl from the country swept up by the cultural changes of the 1960s. The emotional intelligence of the prose avoids melodrama to develop authentic poignancy.