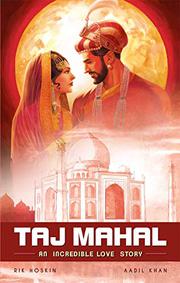 From the Campfire Graphic Novels series

Gives readers a glimpse into the story behind one of the world’s most famous monuments and oldest romances—Mumtaz Mahal’s tomb, the Taj Mahal—and the people who built it.

A flashback to 1592 reveals a soothsayer informing the empress of the Mughal Empire that a child destined for greatness will be born into the royal family. Shahab-ud-din Muhammad Khurram is raised by his grandfather, the Emperor Jalal-ud-in Akbar, and Akbar’s first wife, the Empress Ruqaiya Sultan Begum. At the age of 15, Khurram meets and falls in love with Arjumand Banu Begum. Following the soothsayer’s words, Khurram—who later becomes the fifth Mughal Emperor, Shah Jahan—waits 5 years to marry his beloved, who comes to be known as Mumtaz Mahal; however, Arjumand becomes his second wife, as Khurram first marries a Persian princess as part of a political alliance. The detailed, full-color illustrations enhance the story with their expressiveness and rich jewel tones, but the narrative itself lacks depth and perspective. More important, the text either ignores or glosses over historic details: Shah Jahan had three wives (the last of whom does not make an appearance), and the laborers, who spend years constructing the Taj Mahal, look upon Shah Jahan as a benevolent ruler.

A passable introduction to the life of Shah Jahan for lovers of history.