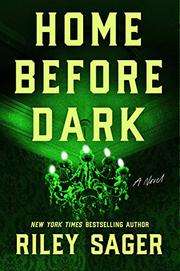 When Maggie Holt’s father, Ewan, dies, she’s shocked to discover that she has inherited Baneberry Hall. Ewan made his name as a writer—and ruined her life—by writing a supposedly nonfiction account of the terrors their family endured while living in this grand Victorian mansion with a dark history. Determined to find out the truth behind her father’s sensational bestseller, Maggie returns to Baneberry Hall. Horror aficionados will feel quite cozy as they settle into this narrative, and Sager’s fans will recognize a familiar formula. As he has in his previous three novels, the author makes contemporary fiction out of time-honored tropes. Final Girls (2017) remains his most fresh and inventive novel, but his latest is significantly more satisfying than the two novels that followed. Interspersing Maggie’s story with chapters from her father’s book, Sager delivers something like a cross between The Haunting of Hill House and The Amityville Horror with a tough female protagonist. Ewan and Maggie both behave with the dogged idiocy common among people who buy haunted houses, but doubt about the veracity of Ewan’s book and Maggie’s desperate need to understand her own past make them both compelling characters. The ghosts and poltergeist activity Sager conjures are truly chilling, and he does a masterful job of keeping readers guessing until the very end. As was the case with past novels, though—especially The Last Time I Lied (2018)—Sager sets his story in the present while he seems to be writing about the past. For example, when the Holt family moved into Baneberry Hall in 1995 or thereabouts, Ewan—a professional journalist—worked on a typewriter. When Maggie wants to learn more about the history of Baneberry Hall, she drives to the town library instead of going online. Sager is already asking readers to suspend disbelief, and he makes that more difficult because it’s such a jolt when a character pulls out an iPhone or mentions eBay. This is, however, a minor complaint about what is a generally entertaining work of psychological suspense.

A return to form for this popular author.