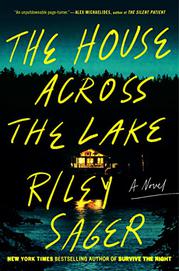 THE HOUSE ACROSS THE LAKE

Celebrity scandal and a haunted lake drive the narrative in this bestselling author’s latest serving of subtly ironic suspense.

Sager’s debut, Final Girls (2017), was fun and beautifully crafted. His most recent novels—Home Before Dark (2020) and Survive the Night (2021) —have been fun and a bit rickety. His new novel fits that mold. Narrator Casey Fletcher grew up watching her mother dazzle audiences, and then she became an actor herself. While she never achieves the “America’s sweetheart” status her mother enjoyed, Casey makes a career out of bit parts in movies and on TV and meatier parts onstage. Then the death of her husband sends her into an alcoholic spiral that ends with her getting fired from a Broadway play. When paparazzi document her substance abuse, her mother exiles her to the family retreat in Vermont. Casey has a dry, droll perspective that persists until circumstances overwhelm her, and if you’re getting a Carrie Fisher vibe from Casey Fletcher, that is almost certainly not an accident. Once in Vermont, she passes the time drinking bourbon and watching the former supermodel and the tech mogul who live across the lake through a pair of binoculars. Casey befriends Katherine Royce after rescuing her when she almost drowns and soon concludes that all is not well in Katherine and Tom’s marriage. Then Katherine disappears….It would be unfair to say too much about what happens next, but creepy coincidences start piling up, and eventually, Casey has to face the possibility that maybe some of the eerie legends about Lake Greene might have some truth to them. Sager certainly delivers a lot of twists, and he ventures into what is, for him, new territory. Are there some things that don’t quite add up at the end? Maybe, but asking that question does nothing but spoil a highly entertaining read.