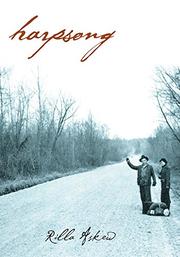 A young man, his teenaged wife and his harmonica crisscross the Depression-era Southwest in Askew’s mournful, compelling, religion-infused third novel.

Sharon Thompson may be only 14, but as soon as mysterious stranger Harlan Singer appears in her small town of Cookson, Okla., she knows they are destined to mate. The self-named Harlan may be part Cherokee, but what’s for sure is his genius with the harmonica, or harp—he’s a veritable Pied Piper. He so charms Sharon’s dirt-poor parents (her Daddy is a traveling preacher) that they give him work. But work doesn’t agree with Harlan. After an almighty ruckus, Harlan whisks Sharon away to Muskogee, where they marry; they honeymoon atop a freight car, for Harlan has been riding the rails for years; Sharon, “ignorant as pudding,” realizes she doesn’t know her husband at all. Still, she shows spirit as they navigate the hobo jungles and run from the bulls, i.e., railroad detectives. Harlan is searching for Profit, his spiritual mentor, a smelly old hobo who once saved his life, but his search is as hopeless as Sharon’s for her family, since on their return to Cookson, her home is deserted; bank foreclosures have doomed the town. The past is unrecoverable; that is one of the novel’s themes, along with responsibility to our fellow man, also addressed in Askew’s Fire in Beulah (2001). Harlan, as retribution, robs the local bank and becomes the stuff of legend, though he later returns the money, for he and Sharon are religious folks, caught in a cycle of sin and the quest for redemption. Askew skillfully weaves their personal dramas (a miscarriage, Harlan’s fearsome beating by the bulls) with the communal hardships of the Depression; through it all floats the sound of Harlan’s harmonica, mesmerizing his listeners. Only toward the end does Askew’s control falter, when a stormy courthouse occupation by miners’ families detracts from the young couple’s ever-changing relationship.

A memorable portrait of a bizarre but credible marriage teetering between hope and despair.