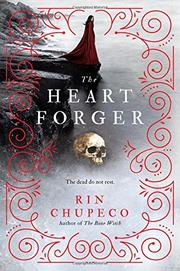 From the Bone Witch series, volume 2

With a thirst for vengeance, a band of terrifying daeva at her command, and her resurrected lover by her side, Tea is ready to face her adversaries in this sequel to The Bone Witch (2017).

Continuing the established plot, Prince Kance of Odalia falls unconscious due to a mysterious sleeping sickness; the old Heartforger—who might know of a cure—is nowhere to be found; and broody and loyal Deathseeker Kalen still expresses an aversion to Tea and her infatuation with the charming prince. Meanwhile, the sinister Faceless Aenah tries to persuade Tea—who is struggling to control the Dark’s influence over her—to join the even darker side. While necromancy, spellcasting, and political intrigue permeate the narrative as in the previous book, romance (falling in love, surprise engagements, and the sharing of heartsglasses) is the clear catalyst here. Chupeco’s time-hop storytelling style, established in Book 1, is still imperfect, as the intense progression of both the past and present plots results in two seemingly divergent stories (and versions of Tea). But from the sweet banter between two lesbian ashas to Fox’s hilarious sarcasm (even when his arm is dangling by threads of flesh), readers will find Chupeco’s dynamic characters and their interactions with one another refreshing, contributing light and liveliness to a story centered on dark magic and impending war. The world, explicated in the backmatter, is a racially diverse one; Tea and Fox both have brown skin.

A sequel that builds in both thrills and enchantment.