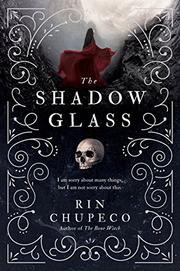 From the Bone Witch series, volume 3

Tea prepares to make the greatest sacrifice in this impassioned finale to the Bone Witch series.

In the present, Fox angrily searches for his bone witch sister, Tea, who will stop at nothing to save him from the half-life he has been living since she raised him from the dead. In the past, Tea is on a quest for First Harvest, the magical plant she needs to revive her brother, which she can only use after acquiring shadowglass. Conjuring shadowglass requires a black heart, and Tea’s darkens as she continues to wield dark magic to achieve her goals. More and more lose faith in her when she becomes plagued with haunting visions and, in her sleep, kills an innocent with her own hands. But someone is using a blight rune to transform people into terrifying daevalike monsters, and it may very well be the same traitor in Tea’s inner circle who has been poisoning her. Though the storylines never truly converge, readers gain insight into Tea’s destructive choices and their aftereffects. Exhaustive explanations of asha history are important to the plot but weighty. Transgender Likh’s exploration of her identity honestly complements Tea’s own journey toward self-discovery, and readers will root for both their romances. Characters have a variety of skin tones, but race is not significant in this world.

A worthy conclusion to a story that is, at its core, about love and letting go.