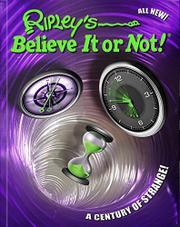 RIPLEY'S BELIEVE IT OR NOT!

A Century of Strange!

Compiled by Ripley's Believe It Or Not

A collection features oddities from around the world and bizarre facts amassed during the last 100 years.

Readers with a penchant for unusual things will find a bevy of them in this oversized, full-color collection compiled by Ripley’s Believe It or Not! (Odd Is Art, 2018, etc.). The book is divided into broad categories that frequently merge, including animals, pop culture, and people. An extensive index, however, can point readers to more specific subjects, like fashion or rooster snake killer. Many of the tidbits in the volume are food-related. A resort in Mexico, for example, offers a primo taco with caviar, lobster, and more for patrons willing to shell out $25,000. In Palau, Micronesia, fruit bat soup comes with broth and the entire creature. And in 2017, a no-hands, yak yogurt drinking contest took place in China. But the assemblage by the 100-year-old Ripley franchise also showcases remarkable people and animals. Short, intermittent interviews spotlight individuals such as Alabamian Lucy Gafford, who dabbles in shower-hair art, and Laetitia Ky of Abidjan, Africa, who sculpts her hair into shapes or hand gestures. Other species are curious as well: Officials in Bangkok put a wild macaque monkey on a strict diet after tourists’ leftover junk food precipitated his obesity; and mantis shrimp have a punch that’s faster than humans can blink. Even pop culture often astounds: A honey bun resembles the titular alien of the 1982 film E.T.; and William Moulton Marston, inventor of the polygraph machine, also created Wonder Woman. The educational value of this collection is without question. While details on animals, culture, etc. come in brief, singular paragraphs, they are informative and will surely send readers, young and old alike, to the internet to learn more. The prose is particularly respectful of the variety of cultures and figures throughout but is occasionally tongue-in-cheek. For instance, a write-up on open-air urinals in Chongqing, China, warns readers to “Pee afraid. Pee very afraid.” Similarly, the story of World War II spy Virginia Hall, who had a prosthetic leg, stresses that she escaped Nazi-occupied France on foot. Despite a good deal of contemporary trivia (from the previous year or two), much of the material, as the title implies, covers the last century. Information on the Towers of Silence, where Zoroastrians in Iran and India have long placed their dead for vultures to pick apart, is even accompanied by a 1926 sketch by company founder, Robert Ripley. There’s little wasted space on the pages of the coffee-table book, which boasts an abundance of vibrant photographs. Sometimes they’re shocking, like making a spiderlike fly larger than life or offering a close-up of an Ethiopian tribe’s annual stick fight, particularly the pre-event consumption of cow blood. But the pictures are more often astonishingly beautiful: A two-page display of the Kite Festival in Guatemala is a veritable explosion of giant, multicolored kites. The volume likewise takes advantage of new media. Some stories focus on YouTubers and Instagrammers while a recurring section, “Your Uploads,” are tales that readers have submitted.