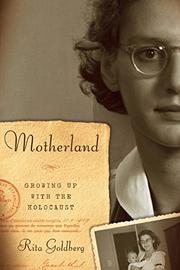 Growing Up with the Holocaust

A daughter revisits her mother’s harrowing past.

Goldberg (Comparative Literature/Harvard Univ.; Sex and Enlightenment: Women in Richardson and Diderot, 1984) grew up knowing that her parents had survived the Holocaust through a combination of luck, agonizing struggles and selfless acts of heroism. Her emotionally shattering memoir focuses on her mother’s experiences, as the author seeks to understand a parent she felt had distanced herself from her children and to explore the legacy of the Holocaust on her own identity. “I have never known what to do with this history,” writes Goldberg. “It makes a better tale than anything that has happened in my own life, and it has to some extent paralyzed me.” She and her sisters felt they “had to live up to the myth we inherited…[of] our grandparents’ martyrdom, on the one hand, and our parents’ exceptional courage, on the other.” They felt inadequate and inconsequential in comparison. Surely, Hilde Jacobsthal emerges as heroic in Goldberg’s sensitive recounting, documented by material from the Netherlands Institute for War, Holocaust, and Genocide Studies; histories and memoirs; and probing interviews with her mother, father and uncle. Living with her parents and brother in Amsterdam, Hilde was best friends with Anne Frank’s older sister, Margot; after the war, Otto Frank became Rita Goldberg’s godfather. Hilde happened to be away from Amsterdam when the Nazis made a sweeping arrest of Jews, including her parents. The 15-year-old returned home to find the Nazi seal on her door and her parents gone. She fled to Belgium and spent the war years in hiding, fearful always of betrayal. After the war, she served tirelessly and devotedly as a nurse, child care center director, and liaison with the British Red Cross in Bergen-Belsen, the American Joint Distribution Committee, and the U.N. Relief and Rehabilitation Administration.

Goldberg writes eloquently of the “volcanic pressures” that shaped her family’s story and continue to haunt her own.