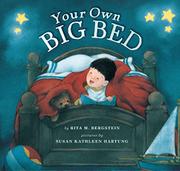 YOUR OWN BIG BED

A little boy’s birth and growth proceeds parallel to that of several animals on the farm and in the wild. Baby chick, baby alligator and baby sea turtle all grow too big for their shells, just as the little boy grows too big for his mother’s tummy: “Soon they all came out— / and so did you!” His parents carry the little boy everywhere, just like little koala bear, baby kangaroo and tiger cub. First steps are followed by sleep, each in habitat or crib. But when the little boy grows even bigger, as marked against the ruled wall, a new big bed awaits, similar to the new stall for a foal and the doghouse for a puppy. Bergstein’s juxtaposition of animal behavior against human adds both comfort and acknowledgement of a little one’s movement from the familiar to the new. Hartung’s softly iridescent paintings add depth to the simple text in their depictions of animals and boy, each childhood milestone gently marked. A nice, if not startlingly new, addition to the genre. (Picture book. 2-4)