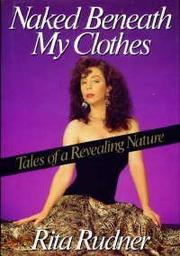 NAKED BENEATH MY CLOTHES

Tales of a Revealing Nature

Stand-up comic Rudner sits down to produce a collection of light little essays. Just as doctoral candidates have to present their theses, it appears that comedians must produce such works for full credentials, and, as this kind of ephemera goes, Rudner's effort goes reasonably well. She might have called her text ``If It's on Fire, Don't Lay Down on It,'' ``Guilty of Innocence,'' or any of more than a score of alternative titles she offers as runners-up, but perhaps ``I Think of These Things So You Don't Have To'' is as suitable as any. Aware of short attention spans, Rudner fires off the traditional self-deprecation and habitual bewilderment in quick bursts. Readers, she concludes, ``like short, funny essays where the subject changes every three pages. Just think of me as a literary Ed Sullivan.'' From the bits and pieces, a biography of sorts may be built: Rudner is the daughter of a mother who wore sturdy, orthopedic bathing suits and a father who ``watched football with the sound off because he lived in fear of hearing the voice of Howard Cosell.'' Teenaged Rita had a pair of tight jeans: ``When I zipped them up, my nose got bigger.'' At 15, she left for New York. Marriage provided more material (on map reading, cold feet, and so forth). Somewhere along the way, she learned comic timing so well that her writing has the tempo of George Burns's—and she's only about a third the age of the old master. An amusing entry that's as easy to digest, and about as nourishing, as a bottle of designer mineral water. (Illustrations.)