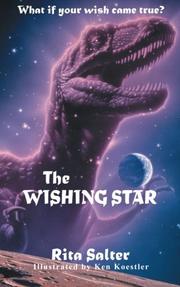 In Salter’s debut children’s book, after a young boy doesn’t get what he wants for his birthday, he impulsively makes a wish that comes true.

Robbie is used to getting a “big gift”for his birthday, and this year he wantsan expensive mountain bike, but his father tells him they can’t afford it because he was laid off. On the eve of his 10th birthday, a whining Robbie sits in his room and flings his other gifts on the floor. He studies his poster of a menacing T. Rex, saying, “I bet you never begged for anything. You always got what you wanted.” At that moment, he looks out his window to see a falling star. The next morning, his father receives a call that he’s been rehired—and Robbie is overjoyed because he knows he’ll get his bike. He does, but on his first spin, he hits a log, blacks out and comes to only to find he’s become an apatosaurus. What’s more, Robbie can talk, as can Bronella, an adult apatosaurus who finds Robbie and helps him adjust to his new life. Robbie yearns for his life as a boy and realizes how much he took for granted: being with his loving parents and friends and devouring a regular diet of hamburgers and corn instead of hundreds of pounds of soggy swamp plants and berries. He spends his days foraging for food, hanging out with other talking dinosaurs and learning how to avoid becoming a meal for the terrifying tyrannosaur named Tyra, who lives nearby. The story turns when Tyra kills his friend Ana. Robbie concocts a plan to defeat her—which includes him acting as bait. Unfortunately, the description of the plan and construction of the trap goes on too long, breaking the story’s steady pace. Besides, readers may feel let down: Just when Tyra’s fate is about to be revealed, the story takes a jarring leap, and the critical moment is skipped over. Still, the story’s ending holds an intriguing twist, with a sequel on the horizon. With the lovely, detailed black-and-white illustrations accompanying the text, Salter does a fair job of working in the tricky business of anthropomorphism (the otherwise lifelike creatures show plenty of emotion on their faces). Also included is a helpful glossary of various types of dinosaurs.

A boy-turned-dinosaur excavates gratitude and humility in this appealing kids’ book.