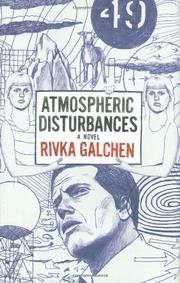 Everything is other than it appears to be in Galchen’s assured debut—an intricate puzzle powered by an urgently beating heart.

That organ and the brain sustained by it are the property of Galchen’s narrator, New York psychiatrist Leo Liebenstein—who immediately informs us that his South American-born wife Rema has disappeared and been replaced by a “simulacrum” only superficially similar to the woman he loves. Leo’s paranoid suspicions seem no more bizarre than the claims of another missing person: his delusional patient Harvey, who insists he is “employed as a secret agent for the Royal Academy of Meteorology,” assigned to control the weather and to foil the nefarious 49 Quantum Fathers, whose experiments threaten the climate’s very survival. What’s really going on in Leo’s crowded mind is hinted at in several allusions to T.S. Eliot’s “Four Quartets” and in a pattern of metaphors that link the relative predictability of human behavior with Doppler radar, triangulation and similar up-to-the-minute climatological measuring and verification techniques. With immense subtlety, Galchen assembles a deeply moving picture of a lover plaintively seeking permanence in a context of inexorable relativity, instability and change. And, in provocative glancing reference to “the disappeared” victims of Argentina’s 1970s “Dirty War,” there is perhaps a buried allusion to Rima the bird girl, the lost loved one of W.H. Hudson’s romantic classic Green Mansions.