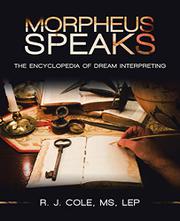 A psychologist offers a guide to the symbols and potential meanings of dreams.

Cole’s (The Archipelago of Dreams, 2011, etc.) book, the third he’s written about dream interpretation, is intended to be more of a manual on the practice. After a lengthy introduction, wherein the author explains his background working with children and teens, the utility he has found in dream interpretation, and the various inspirations and motivations behind this volume, the main body of the work is divided into three sections. The first and most extensive section is a dream dictionary, where symbols and concepts are listed alphabetically and given short descriptions and definitions as to their potential or most commonly held meanings. Some entries have special portions called “Insights,” in which Cole delves more deeply into the spiritual, historical, or cultural wellsprings for the concepts in Western thought. The second section is devoted to archetypes, symbols that appear in similar forms throughout most cultures, while the third focuses on nightmares. Uncredited, amateurish, yet charming hand-drawn illustrations are sprinkled throughout the book. Although dream interpretation may seem like one of the stranger practices in the field of psychology, Cole argues genially and persuasively for its utility in resolving internal conflicts and aiding self-discovery while being careful to distinguish it from scientific analysis. Calling dream interpretation “an intuitive expression of the psyche,” the author roots the practice in such similar impulses as art and spirituality and makes clear throughout that his exhaustive work in these pages is intended to serve as a guide, not a definitive resource. Readers who are skeptics by nature may not hold much truck with the idea that dream interpretation could be useful. But Cole’s intelligent, reassuring prose coupled with his insights into the mind’s workings gained from three decades of working with troubled youth makes a strong argument for his claims.

Intelligent discussions and broad research into cultural and spiritual symbols make this work about interpreting dreams a resonant, thoughtful read.