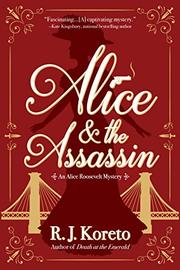 ALICE AND THE ASSASSIN

Incoming U.S. President Teddy Roosevelt assigns wry Secret Service Agent Joseph St. Clair, a former Rough Rider, the task of protecting first daughter Alice. The two strike immediate humorous sparks: she scolds him for calling her “Princess” and gives him pause by rolling her own handmade cigarette. St. Clair, who narrates in a brash first-person, gives as well as he gets from the outspoken Alice. She’s anxious to take in the snakes at the zoo and talk to the fiery revolutionary Emma Goldman, who she believes has information about Leon Czolgosz, the man who elevated Vice President Roosevelt to the White House by killing President William McKinley. Although she acknowledges that she’s an anarchist like Czolgosz, Goldman assures Alice that she had no knowledge of his plans, but shares what she’s heard about the assassination. The curiosity of the first daughter is piqued, and she undertakes her own idiosyncratic probe. With St. Clair running interference, she questions hard-drinking police captain Michael O’Hara, Chinese crime boss Mr. Zhao, and Mafioso Don Abruzzo. St. Clair is skeptical of the value of the possibly random information Alice gathers, but she fervently believes she’s getting closer to the shadowy figure known as the Archangel, who may be at the center of a conspiracy that felled McKinley.