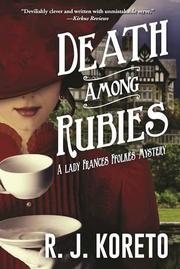 A suffragette sleuth solves a baffling murder, to the chagrin of Scotland Yard.

While Lady Frances Ffolkes’ avid suitor, Henry Wheaton, the esteemed barrister and amateur portraitist, paints her portrait, British diplomat Sir Calleford Kestrel entertains a diverse assembly of guests at his estate, Kestrel’s Eyrie. Frances and her equally brusque maid, Mallow, will soon join the assembly as guests of Sir Calleford’s daughter, Gwen, and her “great friend” Thomasina. At the end of Sir Calleford’s first appearance, Koreto announces portentously that “no one would ever see Sir Calleford alive again.” Mallow discovers Sir Calleford, slumped in his chair in the study, with an elegant curved dagger in his back. Because of Sir Calleford’s status, Scotland Yard sends two members of the Special Branch. Inspector Eastley is surprised and chagrined to find Frances among the company, but she’s nonplussed at meeting him again. Adding insult to injury, Eastley is forced to use Frances as an interpreter for his interrogation of a suspicious guest, Mme. Aubert. Despite Eastley’s disapproval, Frances continues to probe on her own. An anonymous letter to Thomasina, maligning her relationship with Gwen, accusing her of murder and threatening her, helps provide a focus for Frances. Mallow, meanwhile, advised to keep an ear out for gossip, takes the advice above and beyond, cozying up to friendly Constable Dill.

Though its stereotypes and set pieces are sometimes presented with a heavy hand, Koreto’s second case for his titled heroine (Death on the Sapphire, 2016) is devilishly clever and written with unmistakable verve.