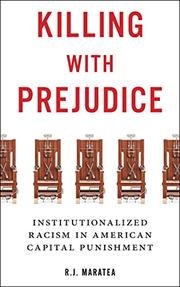 The story of the Supreme Court decision McCleskey v. Kemp (1987), which underscores “the lingering racial and socioeconomic inequalities endemic to capital punishment in the United States.”

In 1978 in Atlanta, Georgia, Warren McCleskey, an African-American, was arrested for killing a white police officer during a furniture store robbery. After years of litigation, writes Maratea (The Politics of the Internet: Political Claims-making in Cyberspace and How It’s Affecting Modern Political Activism, 2014, etc.), his death penalty sentencing was upheld by the Supreme Court in a decision that overlooked “compelling empirical data suggesting that Georgia’s death process was replete with systemic racial bias.” McCleskey was executed in 1991. In this thoughtful and disturbing account, the author traces the story of the case. He argues not that McCleskey was innocent but that he was sentenced to death under a system in which killers of white people were four times more likely as killers of blacks to be sentenced to death. The latter assertion, made by McCleskey’s lawyers, was based on a “detailed and peer-reviewed” study of 2,500 Georgia murder cases by University of Iowa law professor David C. Baldus. He concluded that all individuals convicted of murdering whites were far more likely to receive the death penalty. In its 5-4 decision, the Supreme Court ruled the defense failed to show evidence of deliberate bias by law officials and dismissed the data on disparities in sentencing as inevitable in the criminal justice system. Noting that the decision “affirmed institutionalized racial disparities” in the capital punishment system, Maratea examines the force of “old habits of mind and racial attitudes” going back to the Civil War era. He finds that “capital punishment has borne a close resemblance to lynching in Georgia, where more extralegal executions of black Americans occurred than in any other state.” As lynchings declined in the 20th-century South, “the infliction of the death penalty by the courts increased,” according to historian William S. McFeely.

Provocative reading for anyone concerned about the intersection of race and capital punishment.