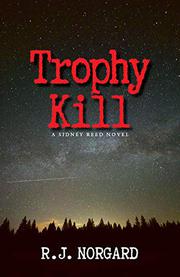 From the Sidney Reed Mystery series

In this debut mystery series starter, a retired private investigator, devastated by his wife’s death, gets a new lease on life when a beautiful woman hires him to follow her fiance.

Sidney Reed has a reputation as “the best private investigator in Alaska,” but he hasn’t taken a case since his beloved wife’s death, nine months ago. Indeed, his life had gone “into a tailspin from which it had yet to recover.” Then Elizabeth Landers knocks on the door of his apartment above the Mighty Moose Café, where he lives off “a rapidly deflating savings account, Coronas, coffee, and sarcasm.” She asks him to tail Harvey Kahill, her fiance, who’s been exhibiting troubling mood swings and odd behavior. Harvey was friends with Tom Landers, Elizabeth’s late husband; two years ago, Tom made the Anchorage Daily News when he died under bizarre circumstances while on a moose-hunting trip with Harvey and their friend Joe Meacham. Reed wonders whether “a simple surveillance was all I needed to get my life back on track.” Then Harvey commits suicide, and Reed’s investigation puts the private eye on a collision course with Barney Pendleton, chief investigator of the Alaskan State Troopers, as well as another dangerous criminal. In this accomplished novel, Norgard brings his own experience as a local-newspaper reporter and a private investigator to bear on a mystery that he imbues with a palpable sense of place. Readers who are “cheechakos”—or newcomers to Alaska, as they’re locally known—will get a good grasp of the setting and the people that inhabit it by the story’s end. Some of the characters behave in unexpected ways, which will confound readers’ expectations. However, the mystery could have used a further twist or two, as providing only one bit of misdirection is criminal.

An offbeat mystery story that builds a strong stage for future whodunits.