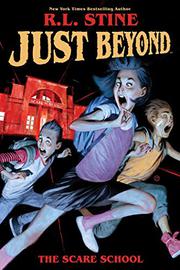 From the Just Beyond series, volume 1

Dressed in infantilizing school uniforms with shorts and Mandarin jackets, Drake, Leeda, and their tag along, Buddy, find themselves in the parallel world of the Scare School, which has a very strange principal but more-conventionally attired students. Pursued by an insectile robot and betrayed by Buddy, an undercover captain in the student guard, Leeda and Drake are forced back into their own school universe to await an ominous punishment at the hands of the Master Dean. Back in the Scare School world, Jess, her twin brother, Josh, and his snarky best friend, Marco, accidentally fall into the portal that lands them in Leeda and Drake’s school. Though the students in Leeda and Drake’s school are also middle schoolers, their lessons are kindergarten level, as the Master Dean mysteriously keeps the students from growing up. After the kids from both realities are locked together in an empty room with bars on the window, they band together to destroy the Master Dean. This diverse cast includes brown-skinned Leeda and Marco; Drake, Jess, and Josh present white; the quisling Buddy presents Asian, unfortunately. The cluttered and confusingly paced illustrations have the feel of second-rate anime and do a disservice to this graphic-novel script, which has a bit of a Twilight Zone appeal. The open ending hints at a second installment that may offer more clues to this rather bizarre middle school wormhole.