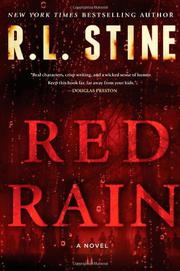 YA fearmonger Stine tries his hand at adult horror, with decidedly jejune results.

When travel blogger Lea Sutter (ignoring urgent forecasts) visits a Carolina coastal island just before a hurricane, that is only the first of the foolhardy decisions that Stine’s plot demands. (What if horror characters went on strike and refused to throw caution to the wind?) After the hurricane levels the island, Lea witnesses carnage, lovingly described. While walking in an ominous post-hurricane red rain, she’s approached by two angelic-looking twin boys, Daniel and Samuel, who utter anachronisms in brogue. Instead of calling Child Protective Services, Lea takes the 12-year-old twins home to Sag Harbor over the objections of husband Mark, a child psychologist and the author of a controversial parenting book. The Sutter offspring, Ira, who is also 12, and teenager Elena, resent the interlopers, as does Mark’s sister, Roz, particularly when Daniel, the obvious sociopath of the duo, keeps comparing her young son to a monkey. The book occasionally switches point of view to the twins, so right away readers know they are scamming the well-meaning Long Islanders, but to what end? At the same time, they seem to have a plan for world domination, starting with ruling their new middle school. In fact, the child characters take up so much space that, but for the sex and profanity in the adult sections, this could easily be another Fear Street or Goosebumps chapter book. Aside from wondering when the police (who also share narrative duties) and the Sutters are going to catch on to who is responsible for some bizarre and garishly depicted mayhem, readers will be puzzling over exactly which horror stereotype fits the twins. Are they zombies from the past, as a bit of foreshadowing hinted? Are they demons or just your garden variety bad seeds? Bottom line, they cannot wreak havoc without the witless collusion of the adult characters, who are definitely not on strike.