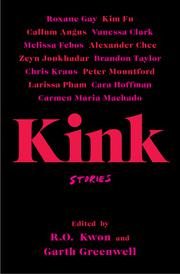 Bondage. Voyeurism. Dominant-submissive relationships. Public displays. All of these kinks and more are explored in the sexy, star-studded fiction anthology edited by Kwon and Greenwell. In the introduction to their probing collection, the editors write: “By taking kink seriously, these stories recognize how the questions raised in intimate, kinky encounters...can help us to interrogate and begin to re-script the larger cultural narratives that surround us.” The characters in these stories illuminate the ways gender, politics, and cultural norms inform power dynamics—inside and outside the bedroom. The collection’s strength lies not just in the diversity of the writers, but also in the experiences they’re exploring. Kink, desire, and sexuality all exist on a spectrum, and so do these stories. In Kwon’s “Safeword,” a pain-seeking wife and her reluctant husband visit a dominatrix dungeon in Chelsea. Greenwell’s “Gospodar,” which follows a gay man seeking to be dominated, reveals the tenuous nature of trust—and the potential danger of getting more than you bargained for. A trans couple deals with being watched—in their bedroom and community—in Zeyn Joukhadar’s “The Voyeurs.” In an already strong anthology, standout stories include Carmen Maria Machado’s “The Lost Performance of the High Priestess of the Temple of Horror,” about an orphan who finds a home in a radical theater in early-20th century Paris; Brandon Taylor’s “Oh, Youth,” which is about the relationship between a rich, older White couple and the young Black man they’ve hired to live (and play) with them; and Vanessa Clark’s “Mirror, Mirror,” which is set in a “drag transsexual nightclub” and explores the transformative power in being desired exactly as you are (“Sometimes, their basking in my beauty was enough to thrill us both”). The at-times explicit collection won’t be for everyone, but these candid, slinky stories are sure to find their audience.