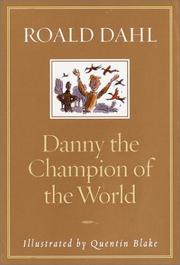 DANNY THE CHAMPION OF THE WORLD

Essentially an expanded short story, but an amusing one, about how motherless Danny, nine, and his father—a mechanic and filling station owner and the best dad you could have—go pheasant poaching on the property of abusive, social climbing Mr. Victor Hazell. Dad tells Danny how his own old Dad invented the Horsehair Stopper and Sticky Hat methods of luring pheasants with their favorite food, raisins. But Danny himself becomes "champion of the world"—to the delighted admiration of the local doctor, taxi driver, constable, and vicar's wife as well as his dad—when he gets the idea of scattering raisins filled with sleeping powder in Mr. Hazell's woods on the eve of his annual grand society hunt. The result for Danny and his dad is an unprecedented bag of 120 birds, and though the sleeping powder does wear off the next morning so that the poachers don't hold on to quite the feast they'd planned on, there is satisfaction for everyone in seeing Mr. Hazell's big day so ingeniously dashed.