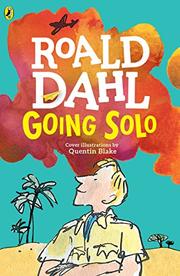 A delightfully captivating swatch of autobiography from the author of Kiss. Kiss, Switch Bitch and many others. Schoolboy Dahl wanted adventure. Classes bored him, there was work to be had in Africa, and war clouds loomed on the world's horizons. He finds himself with a trainee's job with Shell Oil of East Africa and winds up in what is now Tanzania. Then war comes in 1939 and Dahl's adventures truly begin. At the war's outbreak, Dahl volunteers for the RAF, signing on to be a fighter pilot. Wounded in the Libyan desert, he spends six months recuperating in a military hospital, then rejoins his unit in Greece, only to be driven back by the advancing Germans. On April 20, 1941, he goes head on against the Luftwaffe in the Battle of Athens. On-target bio installment with, one hopes, lots more of this engrossing life to come.