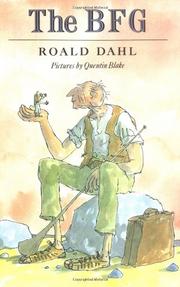 Dahl's elemental fix on kids' consciousness gets this off to a surefire shivery start, with orphan Sophie, awake st the witching hour, snatched from her bed by a giant hand and carried off to a land of giants clear off the last page of the atlas. But Sophie's kidnapper is really friendly (hence BFG for Big Friendly Giant) and does not eat humans as she had feared, but occupies himself gathering and dispensing dreams. He also expresses himself in a mixed-up, cutesy manner that is simply tiresome. Nearby, however, are nine still-bigger giants who do eat humans ("I is a nice and jumbly giant" but "human beans is like strawbunkles and cream to those giants," says the BFG)—and it's to protect the world from them that Sophie and the BFG hatch a scheme: He will mix a dream from his collection and send it to the Queen of England to apprise her of the threat; then, when she awakens, Sophie will be on her windowsill, and the BFG waiting in the garden, to convince her that the dream is true. And so it is that we find Sophie and the BFG breakfasting with Her Majesty . . . and the BFG violating all decorum, even to letting fly a glumptious whizzpopper (kids would call it a fart). Nevertheless the Queen is impressed and sends off her military men, who, under the BFG's direction, rope the sleeping giants and haul them back by helicopter to be imprisoned in a giant pit. This is all told in Dahl's higgledy-piggledy home-made manner, which is rarely disarming here despite the pandering. And it's hard to find the bumble-tongued BFG endearing.