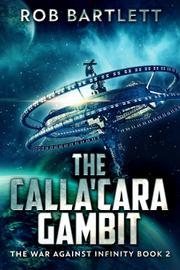 From the The War Against Infinity series, volume 2

A vampire/businessman works to emancipate his sentient spaceship partner in this SF, second in a series.

In The Turing Revolt (2019), narrator Milo Sapphire was a far-future spaceship captain and interstellar trader who launched a rebellion against the ruling Mercantile Empire to free Sentient Ships from debt slavery. After gunning down an operative of the Lotus Eaters Society, the empire’s secret police, Milo has retreated to Calla’cara, a vacation planet populated by talking dinosaurs and empathic crocodile mounts. As CEO of Interstellar Products, Milo’s mission now is to nail down ironclad emancipation formalities, involving financial and legal instruments such as reports, bonds, audits, and contracts, by marshalling his small army of wereanimals and related allies. Milo must also rescue his lover from the cruel clutches of secret-police director Archibald Cox and work out an appropriate revenge while ensuring that Calla’cara can resist takeover by the empire. In Milo’s favor, he’s a roughly 1,000-year-old vampire (thanks to a virus that’s also an inner advising voice) and the Chosen of the Adversary as well as “the scariest motherfucker in the room.” In the first half of this novel, Bartlett pulls off the seemingly impossible—an entertainingly taut, intricate bureaucracy caper centered on filing documents with split-second timing. The second half builds to a dramatic action-thriller conclusion, the many threads clarified throughout by clever exposition. True, Milo’s heroic love life (such as a “personal harem”) is eye-roll–worthy but of a piece with his genial arrogance; he’s also taken down a peg or two by characters like his virus, who mocks him with laughter and the nickname “meatsack.” And, despite Milo’s smug self-confidence, to his own surprise, he genuinely cares for his crew.

Great characters, a fiendish plot, sex, and violence—and even some theology: a terrific read.