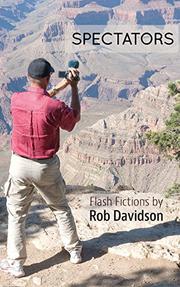 A small but mighty collection of textual snapshots.

Inspired by the photographic and artistic works of Tom Patton, Stephani Schaefer, and Sara Umemoto, Davidson (The Farther Shore, 2012, etc.) offers a set of short works that he divides into three sections: “Spectators,” “Signals & Marches,” and “Fog & Woodsmoke.” Often, we think of photographs as repositories of past actions, but the author uses the present tense to lend immediacy and movement to the images that he creates. From the very first text, “Clean Pilgrim,” he draws readers in and leaves them breathless. Referring to Vernal Falls in Yosemite National Park, Davidson captures the cycles of nature and history as well as the musical qualities of water, highlighting its power to nourish, cleanse, transform, and destroy: “Water is the ceaseless murmur of language, an inky stream beckoning all to begin again.” In a similar vein, he depicts geographical features of Utah’s Monument Valley as “sculpted slabs licked clean by God’s weary tongue.” “Ode to a Selfie” finds a kind of sympathetic logic behind ubiquitous smartphone self-portraits, without which no modern take on photography would be complete, showing how we all attempt to cling to memories and preserve them for the future. Thus, Davidson considers internal landscapes as well, as in “Woman with No Hands,” which bears witness to the role reversal that occurs between a mother and a daughter as part of the aging process. One standout in the second section is “Failure,” which compares humans’ precarious existence to the sport of beach volleyball: “Memory grabs at our lives, like a losing player’s fingers thrust into the sand. We throw it all to the wind, praying it won’t spit back.” Many readers will find themselves returning to these short, meditative texts as they would to cherished photographs, searching for one’s own interpretations and discovering new details, nuances, or shadings that they may have overlooked. As Davidson notes in “The Best View”: “Perhaps an artist is nothing more than a parent learning to let go, releasing images into a disorderly world.”

Flash fiction at its best that’s definitely worth a look.