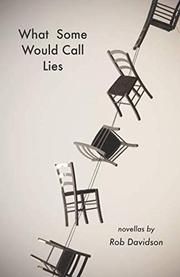 WHAT SOME WOULD CALL LIES

In Shoplifting, a writer named Monica Evans assumes the role of stay-at-home mother to a toddler in the sticks of Northern California. The angst of this identity shift moves Monica to more deeply process life events formerly consigned to “emotional shorthand”—namely her choice to drop out of an MFA program; the memoir she started writing then abruptly stopped; and the death of her sister, a prospective lawyer who was a troublemaker with a knack for shoplifting in a past life. This reflecting, as well as several rattling visitations from a specter, eventually causes Monica to resume her memoir by way of writing a piece on shoplifting. In doing so, she finds herself adopting a penchant for the habit that heals her in surprising ways. In Infidels, an adult named Jackie Rose recalls his wintry preteen years in suburban Minnesota against the backdrop of 1970s postwar anxiety. Jackie is the son of an alcoholic father who is a Vietnam veteran-turned-kitchenware-salesman. Jackie’s mother is a homemaker who—much to her husband’s chagrin—is pursuing a college education. Jackie himself is more like his mother in that he is bookish and prefers to spend time in the library reading and worrying about Russian warfare over training for the hockey and baseball tryouts his father insists he attend. Amid increasing tension between his parents, Jackie disappears into the formidable task that is leaving boyhood behind in “Me Decade” Middle America. In these enjoyable and touching stories, Davidson’s (Spectators, 2017, etc.) prose is meticulous in conjuring the precise atmospherics of time and place. His nostalgia for a bygone era in Infidels is particularly vivid (“I knew where he’d lifted that look. It was Danny Zuko in Grease. We’d seen the movie three times last summer, drooling over Olivia Newton John in those skin-tight leather pants”). The author also demonstrates impressive stylistic dynamism; his writing can be both funny and adept at rendering painful emotional intricacies. That said, Davidson doesn’t extend this care to other elements of his writing. Some side characters lack dimension. Recurring symbols make appearances that read like afterthoughts. And dialogue occasionally veers toward the trite.

A pair of tales that will entertain, transport, and move readers.