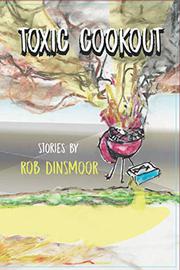 Dinsmoor (You Can Leave Anytime, 2015, etc.) offers a collection of horrific and fantastic SF tales sprinkled with quirky nonfiction selections.

The darkly humorous “Selfies” opens this book with a tale of two young besties, one of whom isn’t exactly human and has an alarming plan for the other. Such a bizarre narrative is indicative of much of Dinsmoor’s work herein. Other tales include “The Generation Pyramid,” which follows individuals caught up in a rather unnerving pyramid scheme, and “The World in Gunnar’s Barn,” in which the titular character’s garage is the site of a fascinating, otherworldly “project.” While most stories are unabashedly science fiction, there’s a handful of nonfiction offerings as well, such as the title story. A standout among the nonfiction is “My Mob Super,” an engaging account of an episode in the life of the author, who hails from Indiana, in Manhattan in the 1980s. His New York super was reputedly mob-affiliated Lou, who was particularly scary when Rob’s roommate neglected to pay his half of the rent. A few of the SF stories have predictable twists, and some explore similar territory. “Times Are Different in Port St. Joe” and “Directions to Another World,” for example, both revolve around wormholes. Dinsmoor, however, distinguishes these tales in other ways. “Times” is the spooky one (Bob is consumed with locating a wormhole in Florida and undeterred by the apparent danger) in contrast to the diverting “Directions” (Leo’s newly repaired GPS system helps get him to his destination in mere minutes, regardless of the distance). Despite the book’s generally dark themes, it offers glimpses of happier moments. “Howard at Ravenswood” and “Life After Bambi” are two seemingly bleak stories that ultimately turn, respectively, witty and bittersweet. Dinsmoor’s no-nonsense writing often begets slow-building horror and subtle humor. In “The Pharaoh Cats,” the narrator describes his sister’s growing obsession with felines, which entails the sight of roaming cats and the “pervasive” odor of “cat pee.”