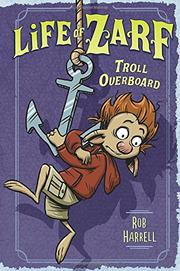 From the Life of Zarf series, volume 3

Zarf, middle school troll, is tricked into a quest for magic beans that takes him into—and then out of—the belly of the beast. Blech.

There are pirates involved, too, not to mention monsters, a sea witch named Ursula (no relation to the one in Little Mermaid—really), and a friendly mer-pig. It all starts when royal classmate Prince Roquefort, justly dubbed a “little waste of oxygen,” persuades Zarf’s seagoing grandpa to take him on a short cruise. Suspicious, Zarf comes along. Indeed, it seems that the prince has concocted a scheme to recover the beans from Jack’s beanstalk, which had been dumped in the ocean as an anti-giant measure, and use their magic to make himself…taller. Disasters, of course, ensue as Zarf and the prince are temporarily swallowed by a finny monster, stranded on a small island with Zarf’s histrionic porcine buddy, and then captured by the somewhat-less-fearsome-than-advertised pirate Redbeard the Unapproachable. Harrell plugs cartoon line drawings of comically disgruntled or distraught figures into the narrative on nearly every page to deliver sly gags and punch lines while navigating the plot toward a bean-tastic battle with the outsized witch. The humans, a minority here, look white, though on the colored cover Zarf has light brown skin under a tuft of orange hair.

A series that began as a Wimpy Kid wannabe moves up to a cabin in first class.