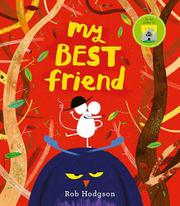 An owl and a mouse are really close friends—kind of.

Mouse and Giant Owl have lived together ever since Giant Owl caught Mouse—er, brought Mouse to the tree, where Giant Owl is generous with the doughnuts. The thing is, while Mouse appreciates the friendship, some alone time would occasionally be nice, yet Giant Owl seems always to be around. Mouse reasons this is “because Giant Owl loves me so much.” It must be why Giant Owl gives great birthday gifts like a house (read: cage) equipped with its own lock, whose key Giant Owl carefully holds onto. Then, after a sleepover, Mouse wakes up in an unidentifiable, dark, round space. Giant Owl’s nowhere to be seen—by Mouse, that is. However, hilarious illustrations show readers exactly where Giant Owl is and what’s going on. Giant Owl’s on a branch, battling severe dyspepsia and making wretched gastrointestinal noises before letting out an otherworldly belch (printed in oversized type that takes up a page). As a result, Mouse blasts out of Giant Owl’s roiling innards and, still clueless, thanks Giant Owl for the rescue. This riotous tale is truly a hoot, owl or no. The wittily dry narration, simply expressed in Mouse’s sweetly naïve voice, is comically adorable, and the colorful, very expressive mixed-media illustrations serve the rollicking shenanigans perfectly.

Here’s a book to make best friends with—but be careful on those sleepovers.