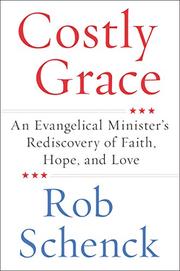 An Evangelical Minister’s Rediscovery of Faith, Hope, and Love

Christian activist and minister Schenck provides a provocative autobiography centered on the evolution of his life as a person of faith.

Born into a nominally Jewish family, the author and his identical twin brother, Paul, shocked their parents by converting to Christianity as teenagers and, soon thereafter, jumping headlong into evangelical ministry. While still rather young, the brothers moved wholeheartedly into the nascent anti-abortion movement of the late 1980s. From the rise of Operation Rescue, Schenck describes in page-turning detail his life at the heart of the abortion controversy. The author seems to have been at almost every important event and turning point as evangelical Christianity reached its zenith of political influence in the George W. Bush years—and as it began a slide into confusion, infighting, and muddled morality over the past decade. Having set himself up in Washington, D.C., targeting politicians and others of influence, Schenck became a well-known face of the religious right, often conferring with members of Congress and being interviewed by the press. But years of fame, travel, legal troubles, and near zealotry took their toll on the author and his family. Early in the Barack Obama era, an encounter with the works of German writer Dietrich Bonhoeffer caused Schenck to re-evaluate his ministry and his priorities, including his involvement with “the politicized religion that had infected me and millions of others back in the eighties, when American evangelicals entered into their Faustian pact with Ronald Reagan’s party.” The author’s seemingly sudden change from a card-carrying fundamentalist to a moderate on almost all controversial issues may be difficult to grasp, but some readers may be most startled by what Schenck put his wife and children through during three decades of unabated activism.

An informative book that leaves the author exposed throughout as the center of attention, as opposed to God.