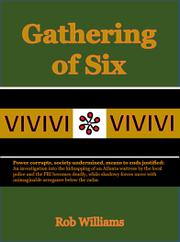 A woman unearths a sinister secret about her parents in this Da Vinci Code–esque thriller.

An aborted kidnapping of a waitress sets the stage for Williams’ (Sins of Variance, 2018, etc.) overpopulated thriller, which takes a while to get to its destination—the revelation of the titular “gathering of six,” which 20-something Megan Adams eventually learns about from her wealthy father, Allen; perhaps putting too fine a point on it, she later muses, “It reminds me of the six-six-six mentioned in the book of Revelations in the Bible.” But before all of this, the novel offers a budding love story that’s much more credible, involving Megan and Sam Blaylock, a construction worker who lives in an economically depressed Atlanta neighborhood; they have a meet-cute when she shows up on his doorstep, proselytizing for Valley Springs Church. The gulf between them is a familiar but timeless one: “I’m a poor working slob and you come from one of the wealthiest families in the country,” Sam tells her. But they can’t deny their romantic spark, and together, they find themselves embroiled in the mystery of the titular six. Williams, who’s worked as the youth director of an Atlanta Christian church, writes his characters of faith with admirable sincerity; in one touching moment, Sam reflects on Christian notions regarding compassion, and he thinks of one of his neighbors—a low-wage hospital worker who gave him food from her own apartment when his cupboards were bare: “Sam moved in to give her a long and grateful hug,” Williams writes. “It was one of the most humbling experiences he had ever encountered.” At another point, Megan insists that a prayer be said for a nearby gunshot victim—just after he’s shot. There are several other effective passages, as well, including during the tense opening abduction attempt.

A somewhat slow-paced thriller, but the well-developed main characters would be welcome in a possible sequel.