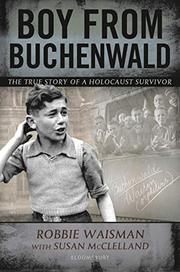 The True Story of a Holocaust Survivor

by Robbie Waisman with Susan McClelland

Following his liberation from the Buchenwald death camp, Romek didn’t know how to reclaim his humanity.

Romek’s childhood in his Polish shtetl of Skarżysko-Kamienna, where he was the youngest of six loving siblings, wasn’t wealthy, but it was idyllic. Skarżysko-Kamienna was “forests and birdsong,” with “the night sky stretching from one end of the horizon to the other.” His family was destroyed and their way of life obliterated with the Nazi invasion of Poland, and Romek lost not just memories, but the accompanying love. Unlike many Holocaust memoirs, this painfully lovely story begins in earnest after the liberation, when Romek was among 1,000 Jewish orphans, the Buchenwald Boys, in need of rehabilitation. Having suffered years of starvation, disease, and being treated as animals, the boys were nearly feral: They fought constantly, had forgotten how to use forks, and set fire to their French relief camp dormitory. Some adults thought they were irredeemable. With endless patience, care, and love, the mentors and social workers around them—themselves traumatized Holocaust survivors—brought Romek back from the brink. Even in a loving and protective environment, in a France where the boys were treated overwhelmingly kindly by the populace, it took time to remember goodness. Parallels between anti-Semitism and racism in the U.S. and Canada are gentle but explicit.

Lyrical writing focuses on the aftermath of the Holocaust, a vital, underaddressed aspect of survivor stories.