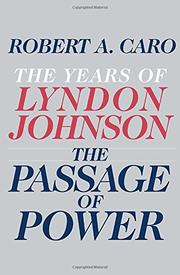 THE PASSAGE OF POWER

The Years of Lyndon Johnson

by Robert A. Caro

The fourth volume of one of the most anticipated English-language biographies of the past 30 years.

This installment covers Johnson’s vice presidency under John F. Kennedy, his ascension to the presidency after the Kennedy assassination and his initial nine months as president. As in the earlier volumes, Caro (Master of the Senate, 2002, etc.) combines a compelling narrative and insightful authorial judgments into a lengthy volume that will thrill those who care about American politics, the foundations of power, or both. Even Johnson acolytes, sometimes critical about portions of the earlier volumes, are less likely to complain about their hero's portrayal here. While documenting the progression of his subject's character flaws, Caro admires Johnson's adroit adaptability. Though he chafed as vice president after giving up the leadership of the U.S. Senate, Johnson seems to have developed a grudging admiration for JFK. However, Johnson and Robert Kennedy could not put aside the animosity that had taken root on Capitol Hill. When Robert became not only his brother's confidant but also his attorney general, Johnson resented the appointment. Caro documents the feuds between them and vividly relates how the warfare between the two men continued after JFK's assassination. On a more upbeat track, the author explains how Johnson's lifelong commitment to helping the dispossessed led to passage of unprecedented civil-rights legislation. The evidence seems strong that JFK could not have engineered passage of much of the civil-rights legislation because he lacked Johnson's influence over members of Congress. The fifth volume is in the works, and it is expected to cover Johnson's election to the White House and his full term, with the conduct of the Vietnam War ceaselessly dogging him. The author writes that the next book "will be very different in tone." Before beginning the Johnson biography, Caro published a life of Robert Moses, The Power Broker (1974), a book many scholars consider a watershed in contemporary biography. The Johnson project deserves equal praise.