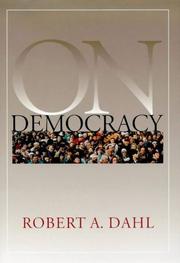 by Robert A. Dahl

An edifying if uninspiring primer on the theory and practice of democracy. During the last half of the 20th century democracy has emerged triumphant as a political system, its rivals having disappeared or been relegated to a few dark corners of the globe. Yet what is democracy? Yale political scientist Dahl (A Preface to Economic Democracy, 1985, etc.) addresses this question in a slim volume written not for experts but for the general reader. After a brief history of the development of democracy, the author offers a theoretical analysis and defense of democracy and then a study of the actual institutions, social conditions, and political attitudes that seem necessary for democracy to thrive. In theory, democracy necessitates participation, equality in voting, citizen understanding of issues and control over the political agenda. In practice, those systems based on elected representation, fair and frequent elections, freedom of expression, associational autonomy, and inclusive citizenship offer the best hope of realizing the democratic ideal. Dahl moves from the ideal to the real in incremental steps, carefully defining each of his terms and linking them to previous terms. His discussion of the positive and negative roles the free market plays in sustaining democracy is particularly cogent. What emerges is a clear, understandable overview of democracy. It’s all very dry, however. Dahl’s focus on logic and clarity of terms captures the form of democracy but not the content of it as a dramatic and exciting ongoing struggle. Democracy here is more a set of definitions than a process. Also, Dahl’s focus on the Western experience, from ancient Greece and Rome to today, excludes much. Missing, for instance, is any historical account of the democratic practices of some native peoples of North America. He strongly implies British rule in India set the stage for democracy there but doesn—t search for any indigenous roots. A more inclusive approach might have served the author’s purposes better.