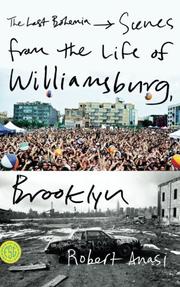 Scenes from the Life of Williamsburg, Brooklyn

The rise and fall of the ultimate hipster enclave as seen through the eyes of a heartbroken survivor.

In the early 1990s, when few were paying attention and the rest of the borough’s demographic still reflected years of white flight, droves of skinny Caucasians started a surprising reverse migration into an even more forsaken part of the borough to the north called Williamsburg. The costs of this new kingdom were grungy hovels and the occasional dark-corner knife attack—an easy bargain for wild American youths high on big-city dreams. Many of Anasi’s (Literary Journalism/Univ. of California, Irvine; The Gloves: A Boxing Chronicle, 2002) cohorts reveled in their cracked concrete cocoons, sheathed from the perceived banalities of the inauthentic wider world outside Williamsburg. Most were flat broke, but awash in a tide of easy sex, drugs and music. The party would not last long, however. The high-rise building boom that billionaire Mayor Michael Bloomberg later unleashed on the city decimated Brooklyn’s stoop-side culture, and this time forgotten Williamsburg was included on the hit list. Left to lament the uncanny transformation and the passing of his youth, the author found himself roaming Williamsburg’s sanitized waterfront as a literary wraith intent on reanimating the untamed lives of those he once knew. With a fine ear for dialogue and a nonjudgmental eye, Anasi conjures the pre-9/11 atmosphere of the place, in which the beer flowed like water and there was always a place to crash after a night of pub crawling.

An impressive bit of literary journalism and a sympathetic look at a vanished era.