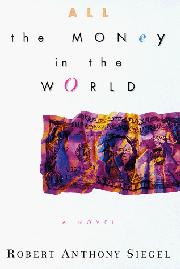 ALL THE MONEY IN THE WORLD

Discontinuous takes on how Manhattan's criminal justice system devours a seemingly smart Jewish lawyer who battened on it for nearly three decades. Although grossly overweight and irredeemably profligate, good- hearted Lou Glasser has claimed much of what he's wanted from life. At age 59, in 1987, the up-from-the-Lower-East-Side bar member has more than enough to eat, a Jaguar, a Chelsea co-op, a son in his senior year at Harvard, and a thriving if raffish practice comprised mainly of low-level drug dealers. One fateful day, however, the feds nab longtime Glasser client Brian Brianson. An immensely wealthy narcotics trafficker who jumped bail 17 years earlier (with Glasser's knowledge), Brian can't bear the idea of long-term incarceration. Accordingly, he turns on the roguish but guiltless Glasser, identifying him as the kingpin of a global smuggling ring. Anna Freeburg, a careerist in the US Attorney's New York City office, buys this fantastic story, and Glasser is soon indicted on a series of world-class charges. Meantime, Jason (his self-absorbed scion) reaches out to Brian and Anna in a vain effort to get Glasser off the hook. Wise to how the system works, the cash-strapped advocate brings the seriocomic proceedings to an abrupt close by copping a plea (to harboring a fugitive), which nets him a four-month sentence in a minimum security institution. Upon release from prison, a still chastened Glasser (now 40 pounds lighter) insists on rifling through his family's none-too- felicitous past. At the close, he's sitting in an all-night Brooklyn diner with Jason and ne'er-do-well brother Eddy, who bickers with his nephew about picking up the check. A debut effort that seems less a novel than a shticky series of set pieces.