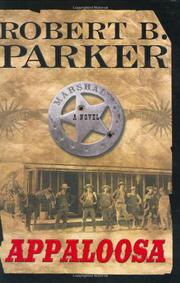 If Spenser and Hawk had been around when the West was wild, they’d have talked like Cole and Hitch.

The dialogue shines with a Western drawl in this admirably plotted change of pace from Parker (Double Play, 2004, etc.). Virgil Cole and Everett Hitch ride into Appaloosa, Colts slung serviceably low, and are instantly spotted for what they are: town tamers. “They’re living off us like coyotes off a buffalo carcass,” complains the Appaloosa establishment, meaning a ruthless no-good named Randall Bragg and the hands he employs on his ranch. Their sins include whisky and food consumed but never paid for, horses “borrowed” and not returned, women commandeered whenever. More recently, the marshal and one of his deputies were gunned down in cold blood. Do Cole and Hitch want to replace them? “It’s what we do,” says Hitch. Marshal Cole and Deputy Hitch then set about posting their rules, the same rules that had transformed Gin Springs, for instance, from a wide-open hellhole to a paradigm of civic virtue. Check your firearms at the town limits, Bragg and his hard-cases are ordered. They obey, though of course it requires a tactical killing or two before the rules are accepted as binding. Enter Mrs. Allison French, a woman more beautiful and more complex than is good for the general peace. Cole is smitten—and awed. “Takes a bath every evenin,” he tells his partner. Having seen more of the world than the parochial Cole, West Point graduate Hitch is cautious. Does a dangerous seductress lurk behind the fetching façade? Into town ride the Shelton brothers, quick, mean gunmen several notches above the ordinary. Bragg reappears in the guise of a community booster: slick, plausible and dazzling to short memories. Pervading it all is the winsome widow lady’s private agenda.