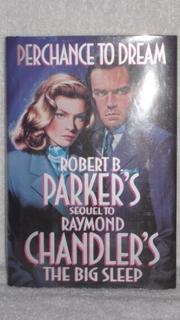 An honorable sequel to The Big Sleep (1939), Raymond Chandler's—and p.i. Philip Marlowe's—first novel. In Poodle Springs (1989), Parker stylishly completed a Chandler novel in a sweet and sassy voice familiar to Spenser fans. Here, Parker's mock-Marlowe narration is tougher and more sardonic, closer to Chandler's own. However, it never matches the hothouse intensity of the original, displayed in many passages woven seamlessly into this sequel—for example, Chandler's final chapter, which, presented here as a prologue, introduces seductive rich girl Vivian Sternwood and her nympho-psycho sister Carmen, who live in a mansion whose "bright gardens had a haunted look, as though small wild eyes were watching me from behind the bushes." Parker picks up the story years later, as Vivian's butler hires Marlowe to find Carmen, who has vanished from the exclusive sanitarium where she's been confined. Marlowe drives out to Resthaven, where his confrontation with its pompous director, Dr. Claude Bonsentir, nutshells Chandler's perennial theme of Marlowe as a populist knight ever-jousting in class warfare. Bonsentir won't talk, but Marlowe then learns that Carmen has left Resthaven with a "Mr. Simpson." He's Ralph Simpson, an impossibly wealthy sadomasochist, and as Marlowe enters his web the p.i. endures a brutal beating, brushes against a murder-dismemberment ring, and noses out a statewide water-rights rip-off. Despite numerous threats, Marlowe won't back off and, finally, with the help of a slick gangster, steals onto Simpson's yacht, where, predictably, he must pit brawn and brain against Simpson and Carmen alike. Not as complex or resonant as the Chandler (or Poodle Springs), and stocked with cliched characters (the corrupt hick cop, the savvy newspaper editor, etc.) but still a smooth, swift, and tight mystery—although Philip Marlowe's spirit soars more fully in Loren D. Estleman's Amos Walker novels than in this enjoyable, loving pastiche.