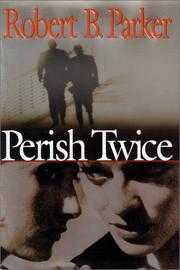 Artist/shamus Sunny Randall’s second case (Family Honor, 1999) might be called A Tale of Two Stalkers. The first is Lawrence B. Reeves, the part-time Boston U. philosophy prof who won’t stop hassling Mary Lou Goddard, the grimly lesbian corporate consultant whose can-do public image would take a nose-dive if it were known that she was being stalked, especially by a former lover. The second is Sunny’s own sister, Elizabeth Reagan, who’s so angry at her unfaithful husband Hal that she can’t stop following him. The second case is piffle, nothing more than an excuse for Sunny to show how much stronger she is than her intolerant, helpless big sister. But the first leads to three violent deaths—before you realize it’s piffle, too: first, there’s Mary Lou’s research assistant Gretchen Crane, presumably killed in mistake for her; then Lawrence B. Reeves, whose apparent suicide conveniently allows the police to close the books on Gretchen; and Jermaine Lister, the rising pimp Gretchen had talked to in connection with her research on prostitution. Sunny identifies all the players early on, but never does figure out who’s playing what role. Instead she gets men to do all the heavy lifting: her ex-husband’s mobbed-up relatives threaten the key player into talking; the player solves the muddled case for her; and two male friends wait outside the showdown just in case.

For all her vaunted independence, Sunny seems this time as if she’s just revving her engine waiting for her celebrated colleague Spenser (Hugger Mugger, p. 214) to show up.