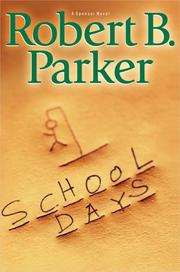 Just when you thought the Spenser saga (Cold Service, 2005, etc.) had tailed off into attitude and wryly clipped trash talk, Parker socks another home run with a tale ripped from not-so-recent headlines.

Two students in ski masks executed seven people at Dowling Academy before one of them, Wendell Grant, surrendered to police. The authorities are convinced the other one was Jared Clark, the buddy Grant gave up to them when they pressured him. So why is blue-blooded Lily Ellsworth so convinced her grandson is innocent that she’s offered a pot of money to Spenser to prove it? As the dean of Boston private eyes sets out to question the interested parties—and he gets stonewalled so consistently by cops and administrators who want “closure” and “healing” that the biggest mystery is how he’s ever going to find anything out—one thing is clear: Jared sure looks guilty. Spenser’s dogged attempts to learn where the killers got their weapons and the training to use them leads him to a student hangout where the kids are even more laconic than he is, a bunch of gangbangers even more prone to violence, and inevitably more murder. Given such a bitter harvest, it’s no wonder he gets paid off and sent packing. His response is merely to change his focus to the question of why Jared, a slow, inoffensive kid who, despite the testimony of dishy school psychologist Beth Ann Blair, doesn’t seem to fit the profile of the classic disaffected teen killer, would have joined forces with a bully like Wendell Clark. The shattering answer shows that Parker’s willing to borrow from more than one set of real-life headlines.

Spenser’s most wide-ranging, deeply felt and penetrating case in years, one that will leave you wondering why, as one kid says, violence doesn’t break out at schools more often.