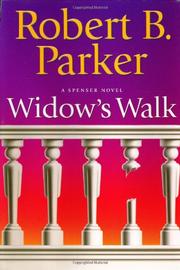 When even Pearl the Wonder Dog is slowing down—she’s deaf and arthritic and obviously hasn’t long to live—you have to wonder whether Spenser will ever rouse himself from his recent doldrums (Potshot, 2001, etc.). Not this time.

As usual, though, Boston’s favorite private eye slides into his 30th case as smooth as a knife sinking into butter. The State is convinced that Mary Smith, with her brains and supermodel looks, shot her patrician banker husband Nathan to death even though she claims she was downstairs watching Survivor; her attorney, Rita Fiore, naturally taking Mary’s view of the case, rouses herself from coyly propositioning Spenser long enough to ask him to dig up exculpatory evidence. Spenser’s highly trained response is to ask for a list of Mary’s friends—it’s a long list including very few actual friends—then begin questioning them and, when he notices he’s being followed by a pair of goons, to go on asking pointless questions until one of his conversations goads the goons into acting. The red-flag suspect, Smith financial advisor Brinkman Tyler, is soon dead, along with an unwisely chatty bank officer, an ex-con who claims Mary Smith hired him to ice her husband, and the ex-con’s girlfriend; Spenser himself, not to be outdone, notches up a sixth casualty. But none of his obviously provocative questioning leads anywhere except the morgue and some gay bars catering to seriously underage drinkers until one of his dozen interchangeable suspects implicates another, and the whole house of cards—a complicated, forgettable scam—comes tumbling down.

Spenser’s always been as mannered and self-involved as he finds Marlon Brando, but it’s hard to remember a single one of his earlier cases that provided so few non-Spenser pleasures. The bestselling hero’s earned a rest between hits, of course, but what about the fans who made him a star?