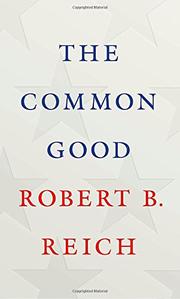 by Robert B. Reich

Reich (Public Policy/Univ. of California; Saving Capitalism, 2015, etc.) takes a note from Adam Smith and runs with it in this spirited defense of the public sphere.

The best economy may be one in which unrestrained trade occurs in keeping with the laws of supply and demand, but it is also one in which human needs are met and externalities such as environmental costs are taken into account. In this new gilded age, writes the author, the common good is often ignored, even if a few interesting things are happening. For one thing, Donald Trump “has at least brought us back to first principles….Trump has got us talking about democracy versus tyranny.” The president and his ilk have also gotten us talking about whether there is such a thing as a social contract or a public domain after all. In this brief but well-argued treatise, Reich contrasts shareholder and stakeholder capitalism, the excesses of the former often explained away by the notion that the executive has a fiduciary obligation to increase returns to shareholders no matter what the cost. “The argument is tautological,” writes the author. “It assumes that investors are the only people worthy of consideration. What about the common good?” The enemies of the common good are countless, from latter-day slumlords to deregulated megabanks and untrammeled hedge funds, all of which disregard the rules society has evolved to keep transactions fair, “tacit rules that can be exploited by people who view them as opportunities for selfish gain rather than as social constraints.” Reich examines the rise of ruleless society as a function of declining trust in social institutions. Against all this, among other things—and now borrowing a page from Sandra Day O’Connor—the author urges a renewal of civic education to enable people “to work with others to separate facts and logic from values and beliefs,” including, one assumes, the belief that it is acceptable to rob the public blind.

Idealistic and stronger in description than prescription, but a provocative essay nonetheless.