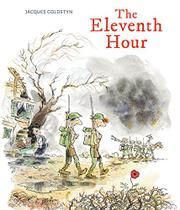 Two Canadian friends, one born just two minutes after the other, go to the Western Front.

Goldstyn’s amusing cartoons develop the two boys’ friendship, one in which Jules is “always two minutes behind Jim,” but no matter: “Jules looked up to Jim, and Jim looked out for Jules.” When war breaks out, Jules and Jim enlist, Jules, always a bit late, stuck with a uniform that doesn’t quite fit and crossing the Atlantic in an old ship that’s seen better days. “Jules and Jim had imagined war to be full of epic battles and glorious charges,” but they soon realize trench warfare is anything but. (A magnified louse makes this perfectly clear.) This extra-long picture book is related in a wry, matter-of-fact tone that lets Goldstyn’s watercolors arc shells across the gutter, back and forth, explosive violence alternating with vignettes that depict increasing hardship for everyone. In its compact, elliptical way, it’s an extremely effective narrative of World War I, always grounded in its two protagonists. Jim is decorated, while Jules, always late, peels potatoes. An armistice is signed and a cease-fire designated at 11:00 on Nov. 11—but at 10:58 Jim goes over the top and is killed, the illustrations confronting this violence clearly. Home without his friend, Jules becomes a watchmaker, and all his timepieces run two minutes slow. Jim and Jules are both white, as are their fellow soldiers and adversaries.

Children may notice that the adults reading with them are weeping—a history lesson and conversation starter in one book. (author’s note) (Picture book. 6-10)

LETTERS TO A PRISONER
by Jacques Goldstyn
Children

SHOOTING AT THE STARS
by John Hendrix
Children