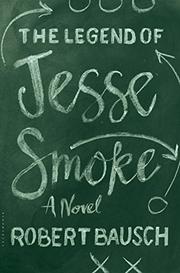 THE LEGEND OF JESSE SMOKE

This sports-hero entertainment conjures up a woman who can play professional football in a book that isn’t overly serious about such social issues.

While vacationing on a Belize beach, Washington Redskins offensive coordinator Skip Granger spots Jesse Smoke throwing a football better than most NFL quarterbacks. She’s 6 feet 2 inches tall and weighs about 180, with a lithe boyish build and freckles that Skip, the book’s semismitten narrator, will mention frequently, along with her blue eyes, curly hair, and sweet smile. Impressed but initially only mulling a practical joke at a Redskins tryout camp, Skip gets serious about signing Jesse as a quarterback after seeing her in a women’s pro game. Then Jesse also reveals that she can kick field goals with 100 percent accuracy from 50 yards. As she begins to set the team on course for the Super Bowl, the genre demands major obstacles, which here include: transgender rumors; the reappearance of a bad mom; weird nosebleeds; a missing birth certificate; and legal action by the players’ union, hoping to oust the lady and preserve the game’s integrity (no laughing, please). Bausch may be best known for the novel that became the movie Bruce Almighty. He’s also the twin brother of another fiction writer, Richard Bausch. In his eighth novel, Robert frames the narrative as a book written by Skip years after the events. This allows the coach to expose his weakness for sledgehammer foreshadowing at the end of some chapters, for instance: “And thus began the brief, heartbreaking career that became the legend of Jesse Smoke.” Bausch clearly is having fun—awkwardly so at times—with what is largely a teen genre aside from exceptions like Malamud’s brilliant The Natural. He even tosses in a Shroud of Turin reference (Jesse = Jesus?). There’s more football here than a nonfan might enjoy, but Jesse is impressive, the play-by-play is well-done, and the plot twists are less ham-handed than they seem at first.

Those unfamiliar with football will be heartened to learn that the game’s moves, strategy, and terminology are explained well enough that they'll be able to appreciate just how thoroughly la femme here kicks male derrière.