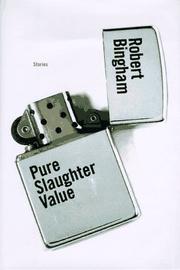 A promising if somewhat repetitive first gathering of short fiction, charting the rather aimless, amoral behavior of generally well-to-do twenty- and thirty-somethings. This is not fresh terrain, but Bingham's work, at its best, stands out for its precisely rendered and convincingly bleak view of life. Most of the 12 stories here turn on some moment that casts a bright light over both a character's past and likely future. ``The Other Family'' focuses on a gathering after a funeral at which some rather predictable tensions erupt. Typically, the narrator, a restless young man, handles the occasion by withdrawing into booze, and by flirting with a callow cousin. ``Doubles'' is an unsettling portrait of Alex, a young currency trader who visits a wealthy older woman at her house to decide whether or not to seduce her. Bingham has a deft hand for dialogue, and the bitter, knowing, slightly despairing tone of the woman Alex is attempting to seduce seems startlingly right, as do the words of her bitter husband when he arrives on the scene. In most of the pieces, violence is limited to the emotional damage of lives that can't seem to get started or to find anything worth wanting to do. In ``Reggae Nights,'' the violence finally breaks through to the surface, as Alex, the protagonist of ``Doubles,'' goes on vacation with a girlfriend, stumbles into a considerable cache of drugs, and ends up lethally involved with two pairs of manic, self-dramatizing pushers. The title story, by contrast, focuses on the baffled first loves of several well-to-do adolescents, nicely mingling innocence with the first shocked glimpse of love's complexities and pain. There are some distinct, strong stories here, but the their tone rarely varies, and a few feel more like rather wan sketches. Still, there's enough distinctive work here to indicate the appearance of a disturbing new talent.