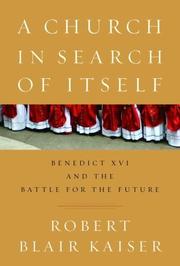 A CHURCH IN SEARCH OF ITSELF

Benedict XVI and the Battle for the Future
by Robert Blair Kaiser
BUY NOW FROM
AMAZON
BARNES & NOBLE
GET WEEKLY BOOK RECOMMENDATIONS:

A disapproving survey of the current state of Catholicism, lamenting the lost opportunities of the 2005 papal election.

If the Vatican can be likened to a Fortune 500 corporation, suggests former Time religion correspondent Kaiser, then that election crushed a stockholders’ revolt. Cardinal Joseph Ratzinger lobbied extensively to take over from his deceased benefactor John Paul II, but always behind the scenes; in public, he disavowed wanting the job. His argument was for continuity, “and like the board members of any major international conglomerate, the cardinals voted for a CEO who would give them that continuity.” Yet continuity, Kaiser argues, was not what was needed. Kaiser is no admirer of John Paul II, whom he depicts as autocratic and unreceptive to differences of opinion, particularly in light of the needs of the Church outside Italy—in California, for instance, where Cardinal Roger Mahony upheld the official position on abortion while campaigning against the death penalty, and who remarked of a nun, “If I could . . . I’d ordain Sister Edith tomorrow.” He couldn’t, of course, for John Paul would not entertain the idea that women could be priests—or that priests should be allowed to marry. The conservatism of the Church, Kaiser makes clear, is likely to grow with the election of Ratzinger, who took the name Benedict XVI after graduating from the Office of the Inquisition to the papacy. One of the highlights of this provocative book is Kaiser’s account of the voting process, which is supposed to be kept strictly secret; Kaiser holds that Ratzinger lost the first round but lobbied his way to victory. He closes with a prospect sure to interest the pope’s former office: the possibility of creating an autochthonous American church, among others, that would be largely self-governing and that would surely allow what Rome does not.

The very antithesis of Peggy Noonan’s John Paul the Great (2005).