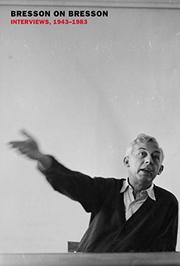 Reflections of a cinematic grandmaster.

Robert Bresson (1901-1999) was one of the few directors of France’s cinematic old guard to be taken up by the iconoclastic French New Wave filmmakers, as the upstarts admired his exacting and poetic aesthetic and his commitment to the idea of pure cinema. In these short interviews, Bresson, who was given to such gnomic proclamations as, “sound cinema invented silence,” proves to be a deeply analytical thinker who nonetheless puts a premium on intuition and instinct. In landmark films including Pickpocket (1959) and The Trial of Joan of Arc (1962), the director famously eschewed theatrical notions of “acting,” casting nonprofessionals in the interest of capturing authentic behavior. Measured, austere, and elegant in their simplicity, Bresson’s films produce profound emotional effects. The extent to which the filmmaker was conscious of every aspect of his craft in achieving those effects, as well as his enduring, passionate dedication to better understanding and expanding his tools, is on illuminating display in these conversations. Most compelling is an extended exchange with New Wave enfant terrible Jean-Luc Godard, whose interrogation of Bresson reveals a penetrating and nuanced appreciation of the older man’s films and provides a poignant reminder of the heady, collaborative, intellectual community that was the film culture of the mid-1960s. Bresson’s monklike devotion to his idea of “pure” cinema wavers not a bit over the course of the four decades represented here, but it is his optimism and faith in his medium that inspire the greatest admiration. The book ends with this statement from Bresson, made in 1983, with 40 years of revelatory cinema behind him: “The cinema is immense. We haven’t done a thing.” That’s not an admonition; it’s an invitation.

A terrific encapsulation of the philosophies and techniques behind the cinematic masterpieces of Robert Bresson, from the man himself.