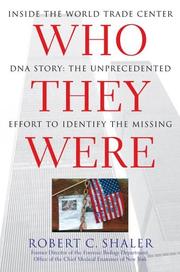 Inside the World Trade Center DNA Story: The Unprecedented Effort to Identify the Missing

An amateurish chronicle of an extraordinarily professional effort—the forensic identification of those killed at the World Trade Center.

Shaler, then director of the Forensic Biology Department in the New York City Medical Examiner’s Office, oversaw that difficult—indeed, impossible—task over a period of more than three and a half years. The work was daunting for many reasons: the sheer number of victims involved, the poor condition of much of the forensic evidence (for “the World Trade Center rubble burned at near or higher than cremation temperatures for three months, which accelerated the decomposition of the remains and also affected the quality of the DNA”), antiquated equipment and ancient software, and even some turf wars among various agencies working at Ground Zero, which resulted in imperfect samples. “I didn’t have sufficient staff to do the job properly,” Shaler confesses; even so, his group managed, as of April 2005, to identify 1,592 of the victims, more than half of those who died. (Among the positive identifications, he adds, were some of the terrorists, their remains quickly “sequestered.”) Shaler’s account should interest other forensic investigators, and its more technical moments will be comprehensible only to those with training in genetics.

Regrettably, this book is being pitched to the mass market. What is not arcane is often a series of howlers in the service of dumbed-down drama.